A History of the Grain Industry Association of Victoria Inc.

The Grain Industry Association of Victoria has a proud heritage. It was formed in 1917 as the Melbourne Corn Exchange. It represented organizations where the principles of the grain trading houses could meet to trade and sort out matters of mutual interest. Activities were centered on the west end of the city, close to the railhead, the Melbourne ports and the Flinders Lane, where the oats for horse transport were traded.

The Melbourne Corn Exchange was a forum of true grain merchants. Our founders bought bagged grain directly, or through agents, on farms, at rail centres, and at the various shipping berths on the Yarra River or on Port Phillip Bay. They then arranged for shipment to Britain.

The term corn had the British meaning – the general term for the seed of cereal plants. Corn merchants took the risks by assuming ownership of the corn – mostly wheat – during its voyage in small sailing ships or small steamers. Payment was on successful outturn in Britain. Sometimes the corn was sold to the ship owner at one of the Melbourne ports, and the shippers became grain merchants. The trade was all in bags. A secondary market operated for jute corn sacks.

Significant changes swept through the grain trade in the 1930’s. The small sailing vessels disappeared. Steamers became larger. Bagged grain began to be cut for bulk shipment in vessels. As shipment size increased, the accumulation and discharge tasks changed. saw the growth of the larger merchants and the concentration in merchant numbers. Demand for oats decreased as motor transport replaced heavy horses.

The 1929 drought stimulated a record Victorian wheat sowing of 1.8 million hectares in 1930, mainly of the variety free Gallipoli, and two Indian varieties, Ranee and Ghurka. This level of cropping was not sustainable and was a major factor behind the Mallee erosion and the frequent dust storms and red rain in Melbourne at that time.

Over production in Australia was matched by similar harvests overseas. World pricing was low. The 30’s was a decade of world depression. Business confidence was in tatters. Growers were hurting. They became better organized and a tide of support for orderly marketing swept through the countryside.

With the establishment of the Australian Wheat Board (AWB) and later the Australian Barley Board the activities of the corn exchange were greatly reduced. In practical terms commodity trading was reduced to oats and corn sacks.

In 1948, the monopoly on domestic and export wheat trading for the period of the war was ended by the Government, and the AWB control passed to growers. Grain merchants were seen as yesterday’s men. The Melbourne Corn Exchange continued, but with reduced numbers.

In the late 1960’s another period of world wheat overproduction led to a system of wheat delivery quotas, and a domestic trade in Section 92 wheat and barley proliferated. Economists began to question the benefits of orderly marketing schemes to both growers and domestic end users. After an Industries Assistance Commission Inquiry, permit trading in wheat was introduced in 1984 in response to the loss of the domestic stockfeed market, particularly in Victoria, to interstate or Section 92 wheat trading.

Since that time the grain industry has continued to move down a path of trade deregulation. Opportunities for trading domestic grains have increased in recent years. With a much more diversified grain production base, a flourishing export trade in Victorian non-prescribed cereals, pulses oilseeds and processed products has developed. Much of the processed pulses are exported to third world countries. They are shipped in containers, which often contain pulses and grains packed in sacks – sadly no longer made of jute.

A name change was made in 1992 to reflect the wider range of commodities traded by the members. With more trading opportunities for non-statutory organizations, The Grain Industry Association of Victoria Inc has experienced a resurgence in membership. The membership base also broadened to include service providers allied to the grain industry, including freight companies and bulk handlers.

The GIAV is proud of its links with the grain industry of earlier years, the shipping industry and the jute trade, but more importantly, the GIAV is a forward looking organization and enjoys the benefits for having the statutory marketing boards, the rail freight entities, the handling companies and grower organizations as active and participating members. 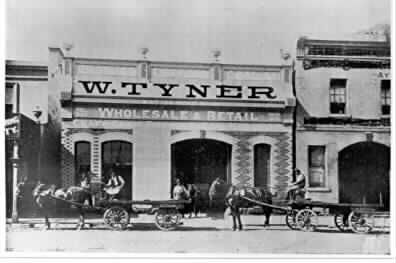 This photograph shows William Tyner’s Grain and Produce Store in High St Malvern, a few doors down from the corner of Glenferrie Rd and High Street near current day Georgio’s restaurant. The photo was taken around 1900.

This store distributed animal feeds including hay and grain to the local horse owners and dairy farmers in the outer suburbs. Animal feed stores in Malvern and Armadale were essential support to the transport system which was mainly horse drawn cart.

I grew up in Glenferrie Rd Malvern. I  remember the Clydesdale Horses carting fresh milk around to homes in glass bottles from Woodmason’s Dairy behind the north east corner of Malvern and Glenferrie Rd in the late 1960’s up to about 1973. It is likely that Tyners supplied feeds and hay to this dairy.

William Tyner started up the High store in about 1898. In about 1916 he went on to pursue a career in local politics (I’m told perhaps in Brighton). His brothers James and Ralph took over the High St business. Ralph Tyner was President of the Grains Industry Association of Victoria in 1948 -51.

One of his sons, Boyd Tyner, went on to establish lucerne chaff mills in Newlyn and other small towns north east of Ballarat. Boyds’ son Graeme Tyner still owns Tyner and Sons Grain Merchants and now operates the business from his Glen Waverley office.